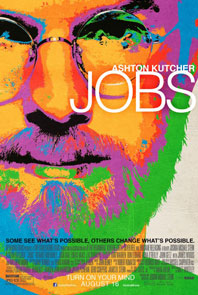 For my friends who are planning to watch JOBS movie. Here is my review. If you know the story of Steve Jobs, Steve Wozniak & Apple, you are going to love this. If you’ve seen “Pirates of Silicon Valley”, there are few areas covered more in this story like after Steve’s coming back to Apple how he took over the company and made sure there is no hinderance any further. Some interesting scenes with Jonathan Ive. Movie is not sequential and it believes that you already know a lot about him. It is only collection of scenes. For example, there is one scene where Steve and his friends consume LSD. There is no mention what is that & what is happening.
People who are going to watch this movie thinking it is some kind of story and they will know Steve for the first time, This will only create confusions & feel like tortured.

As I had already seen Pirates of Silicon Valley, I expected JOBS will cover a lot more about Steve’s coming back to Apple. Business strategies he applied to Apple to be number one company. There is not much told about Bill Gates coming to Steve for developing Office applications on Mac and stealing the GUI.

Movie only covers the innovation area of first iMac and iPod for Music Storage. There is no mention of Apple iPhone, iPad or how iTunes solves the major music industry problem. All of suddenly it just jumps to 2012 to complete the story.

JOBS covers few scenes where Steve interacts with his son REED and daughter LISA (from his earlier Love). There is no explanation how LISA joined his family.

Each character seems to have done lot of research and practise to look stunningly similar to actual characters. That is indeed reason Steve and Apple lovers would like to watch this movie.

NO DOUBT THERE WERE ONLY 10 PEOPLE IN THE THEATRE WHO CAME TO WATCH THIS MOVIE. AT LEAST I FEEL THAT WAS NOT WASTE OF TIME AND MONEY