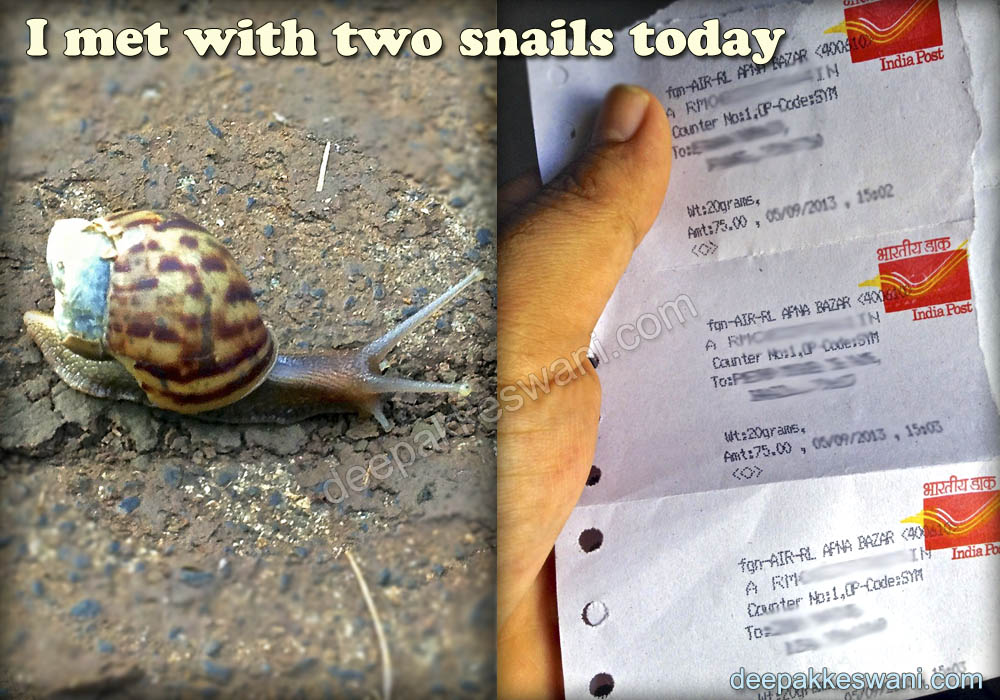 It is really co-incidental that I witnessed two snails on the same day, one by birth and other by practise.

I was walking in the garden nearby and as it is monsoon season, earthworms and other insects are common creatures to witness. This little creature known as snail fascinated me enough to take out my mobile and click a smiling still photo. In fact I’ve never seen so obedient creatures who are still enough when you ask them to smile please.

On the very same day I’ve to visit the post office to send bunch of registered letters. I thought it is matter of few minutes. It is so simple, give the letters and money on the counter & collect the acknowledgement. But it turned out to be very disappointing experience. I’ve to stand in small queue of people to reach to the window. As there was only one attendant, it took 45 minutes for my turn to reach window. Now I was told that only 3 letters are accepted from each person. I wasted 1 hour to post only 3 letters. Across 2 days with multiple visits I could convince the attendant to co-operate and accept all letters for post.

While I was standing in post office queue for multiple times, I realised that 70% people were standing to pay MTNL or MGL bill. Only Few were there for Speed Post or Money Order or Parcel & there was only one attendant.

I believe Indian Post Seniors realised that Postal business is going through downfall all over the world which is threatened by courier companies & high tech communication solutions like SMS, E-mail, BBM, FaceBook messaging & Whatsapp. There is 60 to 70% fall in postal business. To utilise the Postal resource to fullest they started accepting Telephone & Gas bills on the post office counter. None of them would have realised that this add on low margin service can impact their core business model itself which is letters, parcels & money orders.