I usually don’t like to write about non-tech stuff, but I am coming across this form of argument in many newspapers & TV news channels & even on social media.

“Deewaar syndrome is form of verbal argument where person will present other’s wrong doings or crimes as justification for his/her wrong doing or crime.” 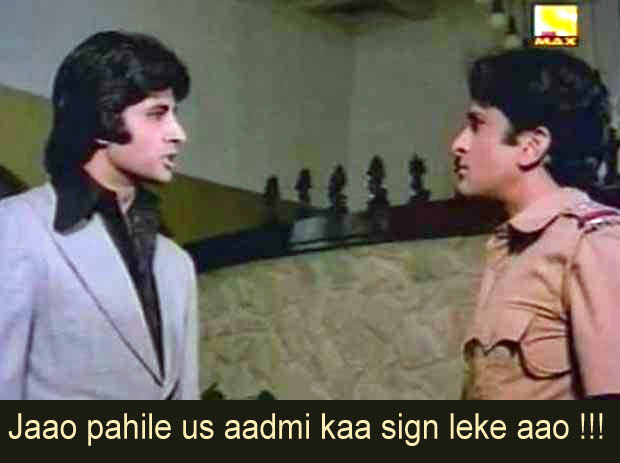 I feel like reminding the entire scene of Deewaar movie and not just what Amitabh said. He has really influenced the generations.

This form of argument can be found very commonly being used in India. I am not sure if it comes from the “Deewaar” hindi movie dialogues or movie itself was representation of culture. Deewaar Movie was released in 1975. Amitabh Bachchan is in the role of Vijay who has ventured into the criminal world. Shashi Kapoor in the role of “Ravi” a police inspector and brother of Vijay. Nirupa Roy is in the role of Mother of both.

Dialogues and screenplay was written by “Salim Khan & Javed Akhtar”.

In this scene Vijay argues with his brother Ravi (Police Inspector) not surrendering as there are many criminals who spoiled his life and family are roaming free.

People influenced with “Deewaar Syndrome” will argue with you and take up a virtual scales (tarazu) put their crime on one side and others crime on other side and show their crimes weighs very less.

“Your crimes will not reduce by counting others crimes. By proving others are criminals it will not change that you are also a criminal.”

Mother brings the compassionate part and says others were criminals but you were my blood. How can you do this injustice with my blood.

If you come across any such argument, please present this as “Deewaar Syndrome” and tell the person to refer the entire scene not just what Amitabh Bachchan / Vijay said.